Trying to Fit the Puzzle Pieces Together

I’m slowly attempting to put together a plot for this year’s Nanowrimo project.  So far, it’s been difficult.  I have some characters, a setting, and motivation for the characters to get moving, but they just won’t budge.

For background preparation, I made a map.  There’s no up or down, north or south to it because every single city on it is the same city*.  Yes, I’m fiddling around with parallel universes.  Do any of the inhabitants of this city/cities know they’re traveling back and forth between parallel universes?  Not really.  They use the technology left behind by a more advanced civilization, but they don’t understand it.  They think it’s magic. 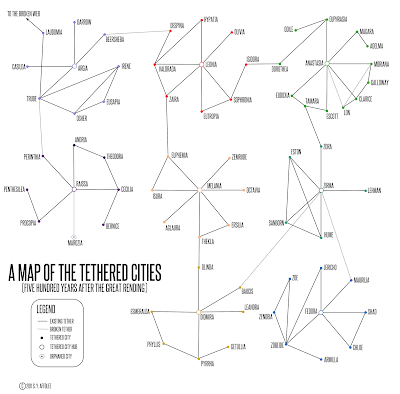 For the past couple of years, I’ve been participating in the 3-Day Novel Contest unofficially, partly because I can’t resist binge writing contests.  I also wanted to see if I really could write a hundred page novel in just three days.  Last year, I managed to finish a story not only at the requisite length but also with a fairly coherent beginning, middle, and end.  So I figured, maybe this is the year.  The year I actually sent an entry to the contest.

In the back of my mind, I thought about doing some advance preparation.  Getting an idea down.  Writing an outline.  But somehow, I never really got around to doing the outline.  Sure, I had jotted ideas down as they came to me, but for one reason or another I kind of put planning on the back burner in favor of doing other things (such as writing 50,000 word stories in January, May, July, and August and a 100 page script in April).

I didn’t send in the registration until September 1.  By Friday evening, I was agonizing over an idea to write about.  I wanted a story that took place in a contemporary setting with a plot that had some science involved in it.  I decided to set a murder mystery at the British Natural History Museum.  Unfortunately, I realized that one of the books stacked in the middle of my enormous to-be-read pile was China Miéville’s Kraken which also takes place in the British Natural History Museum.

“Damn it,” I thought.  “If I do that idea, everyone will think I’ve copied off him even though I wasn’t planning on writing anything about krakens.”

So I scrapped that idea and went with a murder mystery set in a make-believe New England town at a house that used to belong to an obsessive natural history collector in the early twentieth century.  If somebody else had that plot and setting, too, then just screw it.  I was going to plow ahead.

On Saturday morning, I wrote about a page and stopped.  For the rest of the afternoon, I wasted my time brooding and worrying about its unoriginality.  I started writing a different story–about an administrative assistant for an accounting firm who gets infected with a virus that makes her psychic.  I continued writing that story even though I wasn’t particularly happy with it.

By Sunday morning, I hated this administrative assistant character and scrapped the story.  I went back to the first story and wrote about a third of it.  The main character became more interesting.  On the surface, this character is trying to solve a murder that happened a hundred years ago, just to satisfy her curiosity.  But it’s increasingly evident that she may not be a reliable narrator.

Monday.  I worked from 8 AM to almost midnight with only two hours break for lunch and dinner and finished the story.  I am strangely pleased with it.  I like the main character, even though she leaves doubt that everything in the story was either manufactured in her head or actual evidence for unnatural events.  Undoubtedly, it needs more editing.  No matter how good you are, almost no one can churn out a perfect manuscript in three days.  But it’s done.

And today, I printed out the manuscript, had a witness sign off on it, and sent it off in the post.  The story itself is called The Other Grandfather.  The opening scene has the main character, a co-worker, and her boss finding a human head pickled in a specimen jar.  Things get weirder from there.  I don’t have any expectations for it.  The next time I’ll hear about it, it’ll be in January.  As for next year’s contest, well, I have the resolution to do a little more planning for it.  We’ll see if it sticks.

A Month of Short Stories

After novel writing in July, I decided to write a bunch of short stories during August (totaling 50,000 words) for a change of pace.  It was easier and harder at the same time.  Easier, because I think of myself more as a short story writer rather than a novel writer, and harder because I am also working on another writing project (i.e. the dissertation) which for a myriad of reasons is more important.

One of my short stories will probably appear in the upcoming 2011 Augnowrimo anthology sometime in the next month or two.  It’s called “Out Are the Lights.”  A photojournalist is paired up with a Hunter S. Thompson-esque reporter he doesn’t particularly like for a story on rare earthworms. But they get more than they bargained for.  It’s written in male first person, a point of view I normally don’t do.

Anyways, there’s just one last leg of this binge writing to go before I have about a month to prepare for the main Nanowrimo event.  Over Labor Day weekend, I will be doing the 3-Day Novel Contest.  I’ll be frantically outlining today and tomorrow before plunging into the story.

And hopefully, I’ll emerge after the long weekend still sane.