I attended the Friday opening ceremonies but was mostly puzzled. I think there were a lot of inside jokes that I simply did not get. 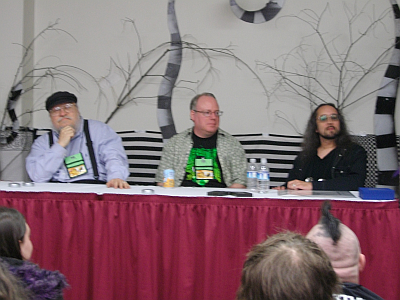 Eventually, I made my way to the “Throne Room”, a.k.a. the hotel lobby where the con organizers had placed the Iron Throne from Game of Thrones, to see the evening panel “The Effect of Setting on Story.” The panelists were Peter Orullian, Joyce Reynolds-Ward, Eldon Thompson, and J.A. Pitts as the moderator. (AQ is an audience question.)

JP: How important is setting? In The Maltese Falcon, the setting is important because the city is used as a character.

PO: In Lord of the Flies the setting works metaphorically as the characters move toward the wild state. James Lee Burke uses lush southern settings, creating feelings of lushness and sweltering heat which works well with mystery and convoluted plot twists. It’s also instructive to look outside of genre.

JR: Setting can be a character and should be developed with the same level of thought. In John Steinbeck’s work, the setting influences the protagonists and story arc. There is one school of criticism, eco-criticism, where they look at setting in particular. Tolkien personified parts of the setting, such as Moria.

ET: Setting can set the tone of the story and the emotional resonance. The setting can create conflict where conflict is lacking. George Lucas does this in Empire Strikes Back where the characters struggle against a frozen world. You can create more drama with a dynamic setting.

JP: In modern and urban fantasy, the reader is hooked with the familiar before introduced to the fantastic. Is it harder or easier to do familiar or non-familiar settings?

PO: You can use shorthand in a familiar world. If you say “lobby”, everyone already knows what a lobby is. If you’re doing a secondary world, you need detail to ground you in the new world. Detail makes it seem concrete and gives flavor to the story.

JR: Doing a secondary world is easier because you’re making it up and no one will ding you on the mistakes.

ET: It depends on what you want to do. Get the details right if it’s in the real world. If you make it up, stay consistent or it will kick the reader out of the story.

JP: For example, get a calendar so you know the phases of the moon. Always have internal consistency and don’t change the rules in the middle unless you have a good explanation. Let the reader fill in the details. Can you overdo detail?

JR: You want enough detail to feel real but not to put the readers to sleep. For instance, you can add detail by being specific, like “redwood tree”, or slip in bits and pieces in the narrative. Don’t write whole paragraphs of detail.

PO: In Carrion Comfort, Dan Simmons set his story in the South, but he’s never been there. But he saw pictures and read about it. He researches by “immersion reading.” So you can fake it. One specific detail can go far to establish your credibility.

JP: What about other sensory settings? In Alyx Dellamonica’s Indigo Springs, time flows differently so setting changes. In other books, authors use smell.

ET: The visual sense is overused (except in film where it’s limited to the visual). Show the way someone walks. Smell is a sense that’s underutilized, so it will stand out. The best sensory writing comes from poetry which is used for maximum impact.

AQ: In radio drama, how is sound used as a setting?

JP: Sounds are incredibly important since there is no visual.

PO: You need texture, audio cues. Smell can be typical. Go into a bar and listen to how people talk and other sounds. How writers write dialogue is not how we speak. Don’t neglect the other senses but also don’t use all the senses at the same time.

JR: Touch is important, especially if you have a character who is working with his hands.

AQ: If something has a specific name in a secondary world but also has an ordinary name in the real world, how do you balance this with setting?

PO: You need balance. Words have different connotations. But it’s a writer’s choice.

ET: You have to have something to ground the reader first.

PO: You can contextualize. For example, Patrick Rothfuss includes invention with clarity.

AQ: Can you legally write about a business?

JP: If it’s generic, such as a character going into Starbucks to get coffee, it’s okay. But if you’re saying how bad it is, it’s libel.

AQ: What about real people?

JP: If the person is dead, like Abraham Lincoln, that’s okay. But if the person is alive, that can also be libel. If you’re worried about it, just change the name.

PO: If you’re worried about it, you should get books about copyright and libel. Writers don’t do enough thinking about setting as metaphor. For example, the hollow man living in a wasteland. Use the setting as a macrocosm of the theme. Writers used to do this more. Also what about topography–who or why do people live there?

JR: In one of my books, I have the “dry line” where trees physically separate countries.

JP: For anyone under thirty, they grew up on TV and became lazy with consumption. It’s too fast. You need to immerse yourself in books and take time to delve into detail.

JR: Steinbeck had working journals which were very descriptive. For instance, in his journal for East of Eden, he consciously uses outdoor settings for foreshadowing.

PO: In Heart of Darkness and Apocalypse Now, the setting mirrors the darkness of the main character.

AQ: With all the detail, how do you keep the story moving?

JP: You need to keep a balance. You can get a lot of imagery with a few words. Use three sentences rather than several pages.

PO: Not all writers are good at everything. Your novel can still be good if you’re good at things other than detail.

AQ: Can people see the same setting in different ways?

ET: Setting is the crucible for things to happen. You need to build it to force the character to grow. An example is Frodo’s journey in Lord of the Rings.

ET: This is not how the author sees things.

AQ: Why do some authors, such as Anne McCaffrey, have other worlds but only use the background in side stories?

JP: That’s doing your homework but not showing it in the main story. Another example is The Silmarillion.

PO: However, there are exceptions. There are some writers who are so good you don’t mind reading pages of detail. These are suggestions, not rules.

AQ: How do you put alternate languages in context?

JP: Just don’t bore me. No apostrophes. Don’t drag the reader out of the story. Alternate languages should be used effectively.

JR: One thing that drags me out of a fantasy story is when they use modern day names.

PO: For invented languages, you can create a few words. It’s not necessary to create an entire dictionary. Be thoughtful about it, especially if it has a specific meaning.

ET: The key thing is consistency. If you use a name with a hard “C”, don’t just use a “K” in the next name.

JP: If you know someone who knows another language, have them check it.

AQ: In Firefly, they used Chinese. In LOTR, Germanic dialects were used for the dwarves.

PO: Consistency and balance is good.

Stay tuned for Part 3, one of the Saturday morning sessions.