When I arrived at the con on Saturday (5/26) morning, I encountered the freakishly huge line that was for George R. R. Martin’s book signing. After skirting around the line that snaked around the hotel, I randomly popped into two ongoing panels.

In “Pin Curls and Victory Rolls, Cat Eyes and Cupid Bow”, two members of the local burlesque group The Cigarette Girls, Meg Hansen and Aly King, gave makeup and hair tips. As someone who doesn’t do makeup or hair (except for the occasional haircut or wacky dye), I found it all pretty fascinating and alien. It was basically an artistic tutorial into turning oneself into a pin-up. Personally, I found it all too much work. I might as well photoshop myself. 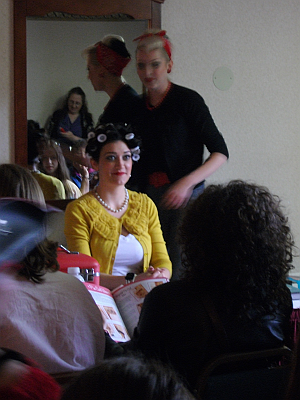 I also briefly attended “An Overview of Japanese Clothing History” by Kass McGann. There was a lot of Chinese influence on Japanese clothing. But then again, I knew all of that, so I ended up taking off early.

I’m primarily a short story writer, so it was with great interest that I went to the panel “Mastering the Short Story.” The panelists were S. A. Bolich, Brenda Carre, Vicki Mitchell, and Kevin Noel Olson. (AQ is an audience question.) 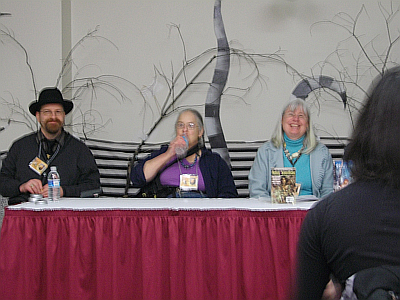 SAB: I do a short story-a-week challenge which is between March and September. It’s a way to get people to get things done. Genre fiction needs a beginning, middle, and end. Readers tend to like stories that make sense.

KNO: So do a lot of stories of pulp fiction. Keep the story moving. There needs to be a definite beginning and end and something in the middle.

VM: You need good characters with motivation, a well-realized setting. Details are nice but less important due to word count length. I have a short story where I use setting as a character.

BC: I have heard short stories referred to as a piece of music with a single solo instrument such as a piano sonata or flute solo. But usually in a short story you don’t have time to convey everything.

KNO: Ray Bradbury said that he doesn’t always worry about structure. He feels more of what he wants to convey than worrying about detail. I suppose you could consider it “soft sci-fi.” To learn how to structure a short story, read a lot of short stories. You need to ask yourself, what is your purpose of writing the story?

AQ: Is that why stereotypes are so often used because in a short story you don’t have time to build everything up?

VM: The lazy writer is going to do that. A better writer will take one or three sentences to tell you who the character is. There are older stories where characters are relegated to stereotypes due to a big idea. But nowadays, good writers do both.

SAB: What is the point of your story? Like poets, drive home the point quickly. You better cough up meaningful words for the amount of money they pay per word. Editors rarely take stories over 10,000 words. In your story, don’t sprawl. You may still lean on what’s known but make it different. For example, you can use the stereotype of the girl next door. But make her from Mars. To avoid stereotype, people watch. The short story should have a point. Every word should count.

BC: Watch people and jot down notes. But be careful you don’t move the stereotype to cliche. You need to know the cliches that show up in other short stories. Short stories have voice, a very strong voice that carries through, beginning with the first word.

SAB: Guidelines are usually open. Editors will take the short story if you hook them with the first line or page.

AQ: But I take longer than that to get into the character.

SAB: Try bringing in the background in lines here or there.

SAB: There was a former editor at Tor who suggested chucking out the first three chapters. Writers of lit fiction don’t know how hard it is to write genre. You have to ground readers in a new world without info dumping and losing the thread. Work the background into dialogue. Every word must work hard.

VM: Each word must do two or three things at the same time.

SAB: Take out things that don’t move the story forward. Trim words like “he said, she said.”

VM: I use The 10% Solution. In this book, there’s a list of things to look at to shorten your story.

BC: You need to really read the guidelines for word count length. It can be very instructive. If it’s not what the magazine or publisher wants in the guidelines, then in reality your story may not be bad–it’s just not the right place for your story. After rejection, send it out again.

SAB: If you want to burn bridges, send stuff that the editor doesn’t want.

AQ: What tells you that your story is a short story or a novel?

SAB: In one of my stories, I knew in 5,000 words it wasn’t a short story when the characters were still talking and there was a large and complex conflict arc. So if you have large world building and conflict, then you may have a novella or novel. A short story wants to be wrapped up quickly.

VM: In a short story, every question is answered. If something still needs to be explained, it’s a flag that you need to write the rest of the novel.

BC: Towards the end of the story, I get a feeling of catharsis. For instance, in a 10,000 word short story, by 8,500 words I get that feeling. If you don’t have that gut feeling by then, you might have a novel instead.

VM: The characters may be waiting for the next thing to happen.

SAB: The three acts to a short story is the set up of conflict, building conflict, and resolving conflict. If any of these take too long, it might be a novel.

BC: There is the try-fail sequence. Start the character with conflict. The character tries to resolve the conflict but fails. He tries and fails several times until the climax, the turning point where the character can’t be the same as before. The decision is made and it’s over.

AQ: Are there any tips and techniques to make the reader care about the character?

SAB: I don’t like characters who are victims, who let things happen to them. For instance, Frodo (LOTR) is forced to be pro-active to go to Mordor. It’s character driven. So the character must do something. this is what makes it interesting to the reader. The world is also one of the characters. Show how the character reacts to the world.

BC: Stretch the character in their ability. Test their mettle.

BC: See through the character’s eyes.

AQ: Some writers use short stories as teasers for their novels. What’s your commentary on that?

SAB: Anne McCaffrey did that, but her short story completed an arc of action which left the door open for something else. Make it interesting. Ground the character.

KNO: Once you build a world, that doesn’t mean you can’t use it again.

SAB: You can set new characters in the same world.

KNO: One example is Bradbury.

BC: Another example is The Name of the Wind.

AQ: What concrete things are different between short stories and novels?

VM: In novels, you have more room to play with characters and conflict.

SAB: You can include subplots. In Lord of the Rings, there’s Frodo, but there’s also the subplot with Merry and Pippin. There’s room to explore feelings and emotion. In a short story, you need to decide to concentrate on action or introspection or something else. You can’t do multiple things.

BC: In Bradbury’s Martian Chronicles, the short stories are all different with only a thread running through them.

SAB: Zenna Henderson’s The People were short stories originally, but then she wrote a thread between each story. If a secondary character steals the show, you have a new story.

BC: Those secondary characters can be referred to as “men in black.” In another example, one author wrote four or five stories about a jukebox that explore the same theme. If you look at a painting, if it’s representational, you can see the story. It’s the same with a short story.

AQ: Is there a formula for novels like the three acts for short stories?

SAB: For novels there are five acts: the introduction, building the action, the false climax, resolution, and climax.

BC: Lester Dent also had a formula for pulp fiction which tells where everything happens.

AQ: How do you find magazines and anthologies to submit your short stories?

Stay tuned for Part 4, which is on constructed languages.