I attended part of a presentation called “An Overview of Victorian Clothing History” by Kass McGann. It was interesting. The myth that you could cut your throat on starched collars was debunked. The collars were made of cellulose so you could get a bruise, but it would be impossible to cut yourself. From the late 1860s to 1880, the color palette was incredibly bright and flashy–despite all those sepia-colored pictures–because artificial dyes had just been invented. And the so-called health corset or s-curve corset was even worse than the regular corset because it still kept pressure on the waist and put pressure on the spine which killed a lot of women.

The panel “Gender Roles and Societal Change” was presented by M.J. Engh, Deby Fredericks, and Parris ja Young. (AQ is an audience question.) 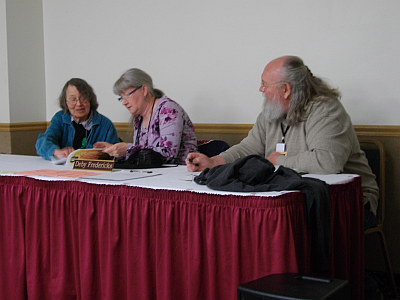 DF: I grew up when women still used male pseudonyms.

MJE: I was one of those authors who used initials. Because I wrote a violent first novel.

PY: Nowadays there are more women in leadership positions. So is the situation improving? In the prehistoric age, they had Venus figures and fertility icons which made people think it used to be a matriarchal society.

MJE: That idea is in the book The Goddesses and Gods of Old Europe. It’s a possible point of view. But I don’t think matriarchal society was necessarily peaceful.

PY: Then after that women start getting put down and squeezed out. When did it start?

DF: There are phases in things that come and go. Sometimes the swing takes a thousand years.

MJE: Take for instance Roman history during the first emperors. The typical Roman woman had more independence than 19th century women. They could run their own business or not take their husband’s name.

DF: But civilization collapsed and Europe had to start again. In the Dark Ages to the year 600, there were a lot of generations.

AQ: Didn’t that put the church back into power with Constantine? That’s a 1500 year swing. In classical Greek civilization, it was considered strange to be in love with your wife.

MJE: But it was different in Athens than from Sparta or any other city-state. You need to start in the neolithic period. Women held all the secrets of planting and harvesting, maybe. But when people settled down, they started having hierarchies that were taken over by men.

DF: Priorities changed. They had more to protect. Usually men protected family and community. Priorities change if you have stuff to defend. Men usually fight but women don’t have the gut instinct for that.

MJE: Since there was no hunting, men were running out of things to do.

AQ: There were no written records back in those times so people thought it was all peaceful and idyllic. But one example was the Mayans. People thought they were peaceful until they had a breakthrough into their language and they found out that they really weren’t that peaceful.

PY: Margaret Mead and Jane Goodall watched the animals and said that they were kind to each other. But during the 1960s when there were a lot of hostile takeovers, there were more brutal observations of animals.

AQ: Isn’t it more of a class movement? The lower class always had to work, so maybe this is an upper class thing.

AQ: The frontier states were early to adopt that.

DF: That was because there weren’t that many people in the frontier in the first place. If there was an opening for a postmaster and a woman was available for the job, she became the postmaster.

PY: Jeannette Rankin was the first woman to serve in Congress even before the women’s vote.

DF: It may seem like these are slow changes, but it has to do with the young adopting a viewpoint that the older people don’t hold. Like interracial marriage or gay marriage.

AQ: All of this seem to be preceded by war.

DF: That’s seminal to the minority experience as well.

AQ: And society’s view on sex in literature is from the influence of society.

DF: One example is Silent Spring which started the movement for environmental consciousness. Before, there was the notion of “better living through chemicals”. There had been no science done on the side effects. Rachel Carson noticed that spraying of insecticides caused the dying of birds. She was called a hysterical woman scientist and people were shocked that she was raising her nephew who was born out of wedlock. But now, we do things differently when we think about trash or fuel consumption.

AQ: But the same thing happened in World War I, after it women were told to go back. In fantasy, Edgar Rice Burroughs had a princess wielding a sword, but at the same time there were a lot of other books where the hero was still saving the damsel in distress.

DF: Another example is Tarzan. Many people don’t know that there is a black maid in that story who constantly needed to be saved and was superstitious. Every work mirrors its time.

PY: There are some great women’s roles in Game of Thrones.

AQ: How would you address work that comes out today? I think there’s a shift towards misogyny with video games. Or even Dr. Who. It’s not reflecting a progressive view. With all the comments on YouTube, young men grow up thinking that it’s okay to denigrate women.

DF: I was disappointed in Diablo III. All the female characters were in bikinis.

DF: The problem is with political discourse, the influence of media, talk radio, the audience throwing chairs. But it’s not tolerated as it once was.

AQ: The people making games are catering to the lowest common denominator due to economics. But I also see other games and books where there is better treatment of women.

MJE: The thing is, you can complain about it now. It’s getting noisier. The general trend is for improvement. Things could be a lot worse, so don’t give up.

AQ: There’s also a trend for women to be kick-ass and have traditional male characteristics. What about traditional female roles?

DF: The trend for kick-ass heroines is a sales tool because the audience is still men. Young men are more accepting about kick-ass women, but they still have to be in a bikini.

AQ: But it’s problematic for men if you give them characteristics that are traditionally considered female.

PY: Women can multitask. Men target things. In a relationship, they both have to give up something.

DF: But a lot of it is socializing.

AQ: But a stay-at-home dad is still derided.

DF: In anime, there is a joke about women who can’t cook. But food is important.

Stay tuned for Part 12 which contains a panel on telling a story in different media.