The subject of the panel “The Many Ways to Tell a Story” was: “Stories come in many shapes and sizes, from books to comics to games to television and movies. How is storytelling the same among these media, and how does it differ? What are the challenges unique to each? What makes a good book versus movie versus comic?” The panelists were Kenneth Hite, George R. R. Martin, Peter Orullian, and Eldon Thompson. (AQ is an audience question.) 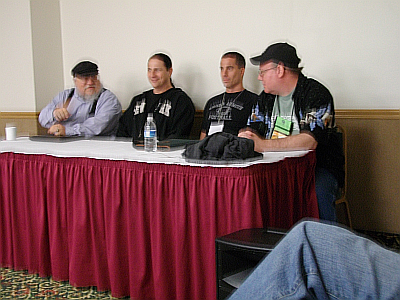 GRRM: How do you like to tell your story?

PO: I like multiple viewpoints to tell the relationship the characters have between one another. A person who does single viewpoint well is Patrick Rothfuss. You have to ask yourself whose eyes you’re telling it through.

ET: There are certain similarities despite the format. There are pros and cons.

KH: I provide the format in gaming as the gamemaster. Some role playing games have an implied story while others are broader. They allow as many stories as possible to emerge organically. Night’s Black Agents is a spy thriller with less handholding. For other fantasy games there’s a different framework.

GRRM: The gaming aspect is interesting. Is the video game a new art form? There are various forms that existed to tell stories. Poems, plays, and TV weren’t considered legitimate forms for storytelling when they emerged, but now they’re accepted. Are the video games developing in this direction?

PO: I work at Xbox and we prepare them like a franchise. In Halo, the first element is the story. It’s before developing the game engines or pixels. Then you figure out how to use the game itself–like novelizations, webisodes, or developing a movie. Corporations now look at this to create something novel. In transmedia, the story experience is larger than the sum of its parts.

ET: Transmedia has different facets. King’s Dark Tower series is too big for traditional film. Gaming can still deliver a story to the audience. It’s where the reader tells his own story. The API can allow gamers to build it. What’s limited is time development, so you can bring the gamer into it.

ET: You could make that argument.

KH: In the tabletop game, you start from scratch. You can use any story or any character. There’s no set way to determine it. There are two types of video games: some have one arc where you can do side quests. In other games, you can do almost anything. It’s like a sandbox. But it’s hard to say it’s the same type of narrative like Gilgamesh or Casablanca. Narrative is collaborative in gaming.

GRRM: Consider the new versions of Sherlock Holmes like the one on the BBC or Robert Downey Jr.’s version. But Sherlock Holmes is in the public domain. Real Sherlockians would reject these new versions. There are lots of entertainment forms including video games which continue to evolve. But can it ever evolve into art? Art is usually the product of a single person. Our culture lauds artists as great. An author is given credit for bringing a book to art. Are video games waiting for its Shakespeare or due to its form, it will never come to pass?

KH: Bioshock is rather primitive. But you can’t say that they can’t be art.

PO: I would argue that the Shakespeare of video games is already here. They spend millions in development. There are cut scenes. And you feel like you’re participating with the story. There are alternate endings.

PO: Storytelling is not mutually exclusive. You can bring people to the story. Transmedia can bring color. I would say it’s a Renaissance in gaming happening now.

AQ: What about PC gaming?

PO: The cloud is making it all converge so you can do gaming on any platform. Everything primarily resides in the cloud. It’s called cloud sourcing.

AQ: As a musician, I find that there’s a parallel between jazz musicians and gaming in regards to collaboration.

GRRM: You have a collaboration in a band. But the audience is still passive. In gaming, you involve the audience. So maybe it’s like karaoke.

KH: In role playing, you can draw a contrast with other art forms. It’s like a “jam session”. But can you call a jam session a composition? Is it just pure music or are you actually playing something? There are narrow stories in indie games.

GRRM: I’m nervous about collaborative things. Most great art are tragedies: The Great Gatsby, Romeo and Juliet, Casablanca, Citizen Kane. Part of us loves this stuff. But generally in a collaboration, you end up with a happy ending.

KH: When they staged King Lear, it ended up with a happy ending.

GRRM: If you give the audience a right to select the ending, then you may lose the tragic endings. That’s the danger.

ET: If you have no emotional attachment, there’s no reason to put in a happy ending. If everyone is telling the story then someone will ask, “why are you killing my character?” You lose the emotional power.

KH: The Odyssey has a happy ending.

GRRM: But only Odysseus had the happy ending. Everyone else didn’t.

AQ: What about Diablo? There are games that end happily or tragically or are ambiguous. Don’t you have to trust that they hire the right people to make the game? Isn’t there a different Shakespeare for everyone?

AQ: Halo seems like it has less of a story. They put out a new one, it seems, every month. Are there more commercial concerns that hinder storytelling?

PO: No. They have to think about a successful franchise. But they also think of the story. Of course, not all people will like the story just as not everyone has the same favorite novel.

AQ: Is there a plot to a video game if you have a controllable character?

PO: The video game is on rails, so you will get to the same endpoint no matter what you do.

GRRM: But what if you don’t want to shoot the bad guys?

KH: Then you bought the wrong video games.

GRRM: But I could negotiate with them…

PO: Have you read your own books? There are many video games from Bejeweled to games with an open world.

AQ: What about open source?

PO: There will be open source, but it’s like the Cliff Notes. Look at the construct, but never at the expense of the story.

KH: If you open up print, people will rip it off. One example was Dickens. His work was so popular during his lifetime, they wrote fanfic about it.

AQ: For adapting Game of Thrones to the screen, did they add scenes that you didn’t write? Did they need your approval?

GRRM: They didn’t need my approval. I think the extra scenes were fine as long as it added to the character, but I also dread it because it adds to the time it takes to tell the story.

AQ: How do you feel about new scenes when you haven’t finished the story?

GRRM: Well, we’ll find out down the road.

PO: There are some committees in video game development, but there’s someone who has the story bible and the shareholders. But it’s not as complicated as Hollywood.

ET: It’s more like TV than film. Less cooks in the kitchen.

GRRM: But isn’t there a problem with finding the Shakespeare of video games? That industry is very corporate. Is there a room for a visionary? Sid Meier is known for his games. But Halo has no byline. Is it all group think and committees?

PO: Single authors are emerging. Like the apps on the iPad. Draw Something had 55 million downloads in three weeks. Mobile gaming has the advantage of the size of its audience. Smaller game developers can be nimble. And bigger corporations are looking for small game developers. So gamers can now think about story and game design.

KH: There are other corporate cultures–like the Japanese and French–where people buy based on creator. It takes a while to get recognized. It was a while before Shakespeare got his name on his plays. For comic books, it wasn’t until Frank Miller and Alan Moore came on the scene in the 80s.

PO: But you need to distinguish it from names that are actually franchise names.

PO: There’s opportunity for a person not part of a studio.

AQ: What about crowd funding?

AQ: With all the new video games, what will happen to books?

KH: There are people who only do World of Warcraft or watch Buffy because it fulfills all of their entertainment needs. But for most people, they like several different things.

GRRM: I began going to science fiction and fantasy cons in 1971 as a comics fan. But every year, those fans get older and there aren’t many kids. But it’s because they’re traditionally hostile to new media which keeps out the kids. And that makes me worried. But then I come to a convention like this where there are younger people. There’s Comic-Con but it’s not exactly the same. It has a wider, younger base. Publishers will find out that younger people will read. So people will do video games and books. And get gamers to read.

Stay tuned for Part 13 which is a panel on writing villains.