The program notes for the panel “From the Villain’s POV” stated: “There’s a reason writers stick to good guys: writing from the point of view of a villain is hard. Join us for a discussion of how to write from the bad guy’s perspective, and how to create and maintain empathy for your monster even when they are doing horrible things.” The panelists were M.J. Engh, Deby Fredericks, George R. R. Martin, and Peter Orullian. (AQ is an audience question.)

GRRM: I don’t believe in villains.

PO: A villain isn’t a villain in his own mind. So is it really the villain’s point of view or not?

DF: I don’t believe that villains don’t know that they are the villains. They want what they want and they’ll try to justify it.

MJE: I agree with George. People do bad things to each other. You can understand why they do evil things, but you don’t have to forgive them.

GRRM: Some call the villain the hero from the other side. Like the Greeks and Trojans. You lose sight of it during a war. You tend to demonize the other side. That’s where knights in shining armor came in. However, knights were far from glamorous. They may have taken oaths to protect the innocent and so forth but actually they murdered and did a lot of other horrible things. Drama arises from the tension between high ideals and corrupt ideals. The knights believed their own press. They thought they were the good ones. Villainous acts doesn’t make the villain.

DF: I work in an elementary school where the kids are constantly jockeying for position. They know that what they’ve done is wrong. But it’s status. Someone of higher status will believe that striking someone does not matter because he will choose the perk of status.

MJE: They’re sure that others won’t see it as wrong because they did it, but if others do it, those others would be wrong.

DF: At the end of the year, there’s a lot of equipment damage on the playground with balls on the roof and so forth. The last remaining good ball is a precious resource. We have to explain to the older kids to be kind. Although some teams spontaneously include the younger kids.

MJE: That’s why grown-ups teach morality. What about hard-wired morality?

GRRM: Something happens when they grow up. They do some monstrous acts without thinking it’s wrong. Like during war or 9/11. Did they lose the ability to tell right from wrong? History is worse than my own books, making them look like Rebecca of Sunnybrook Farm. Gordon Dickson planned a series of nine novels–three science fiction, three historical, and three contemporary–with the theme of the moral evolution of humankind. However, he never got to write them.

DF: Adults fudge the truth, thinking that the kids can’t handle the truth. But in George’s books, he doesn’t shrink back from what the characters will do to get to the throne. Be honest in what you’re sharing and don’t fudge.

PO: There’s moral relativism and there’s what M.J. said in the “Psychology of Evil” panel. That morality is hard-wired. That there’s a universal morality. It’s like how the settlers or the Native Americans viewed manifest destiny. So what morality should we subscribe to?

MJE: There’s evidence for hard-wired morality. In some recent studies of babies of about six months or so, they have a sense of fairness. They share equally. They attach labels of good and bad, sharing and greedy. It’s an innate sense of fairness. But that’s also subject to cultural influences. So does the end justify the means? People may think that in some situations it does because humans have a tendency to think like this.

GRRM: Gordon Dickson said that we have a tendency to identify with larger groups. In moral evolution, it looks like we’re going in the right direction if we take the broad view. For the Cro-Magnons, life was like Hobbes, nasty, brutish and short. It was centered on the family. Then there were the Greek city states. And then the Roman Empire. But even they didn’t include everyone. They still thought there were barbarians outside of the empire. The US is a country of immigrants like a melting pot or salad bowl. I like to think of myself as Terran. I have morality without nationalism in A Song of Ice and Fire. Primarily, the characters identified with their house. In the Hundred Years’ War, it was the Capetians and the Plantagenets, not France and Britain. It’s still happening today. Villainy is not a member of the group. So broaden the group to evolve morality.

PO: As writers, we used to have just a protagonist point of view, like Dudley Do-Right. Now we have multiple points of view so we can sympathize with the other side. But do we still write that or do it with an edge for one side that we cheer for? Or are there equally heroes and villains?

MJE: Not all characters are equal or there would be no story. You can empathize but the reader or writer doesn’t have to approve. How do you make characters good and bad so not to tempt the reader to identify with the wrong character to cheer for?

PO: Is everyone behind the same guy in Game of Thrones?

GRRM: We watch who orders which house T-shirts. And we had orders for all of the houses so there’s a mixed response. It’s a fallacy that history is a tale of good and bad guys. However, moral relativism isn’t true. Everyone is not equally bad. You can’t place equal blame. Look at each individual case with objectivity. I was raised as a Catholic but don’t practice anymore. But I find myself still rooting for the Catholics in history. There’s an innate tendency to root for your team.

DF: There’s an interaction between the writer and the reader. We guess the story that you want to read. If there’s a misstep of character, the readers will get angry. Thomas Covenant committed crimes that the readers didn’t like. So there’s a balance between expectation and how the writer tells the story. George challenges the reader to be flexible to see the other viewpoint.

PO: You need to show failings, how people are. When I finally realized that my dad was not perfect, it was crushing. You can show that good characters fail, but you still root for them.

GRRM: If you read my blog, you know I’m a football fan. So there’s the juxtaposition of the rational and the emotional. I know there are good and bad guys on every team and that they’re just doing their job. But I have emotional reactions to particular teams. You can create villains in your own mind.

MJE: I recommend my own book In the Name of Heaven. There are no good guys as groups. Everyone persecutes each other because all of them thought they were doing right. Morality hasn’t caught up with Zeno’s stoic ideal. It’s natural for humans to identify to their own.

AQ: What about privilege within the same group?

MJE: You’ll have more opportunity to do villainous things. Anyone in authority will tempt revolution and abuse.

AQ: Doesn’t everyone have their own personal journey?

GRRM: Yes. Every character will have a journey. Their choices are the milestones. Will they leave people to die or steal their food? It’s a question of choices and personal agendas.

AQ: You have a vast array of characters. Do you find that some characters are more difficult to write their point of view?

GRRM: Bran. It’s hard to write a young kid. How much does he understand what he sees? And I don’t write the three-year-old. How much do you remember when you’re three? I don’t think it’s difficult to do villainous characters. How difficult was it to write Arslan?

MJE: It was difficult. It took me eight years. It probably had something to do with exorcising my own demons. But once I got into it, I understood him but did not forgive. I was very disturbed when a reader showed me a first edition of the book that he had gotten from a used bookstore. There was a lot of underlining in the book where it was clear that the previous reader saw Arslan as the hero. So the writer needs to take responsibility.

AQ: How easy or difficult is it to generate a scary scene? Do you bring in a richly described villain?

GRRM: Fear doesn’t come from a scary villain. It comes from the fear that the hero won’t survive. The hero could be facing seventy-four orcs with a penknife and it might not be scary. The author needs to give cues and establish that nobody is safe. 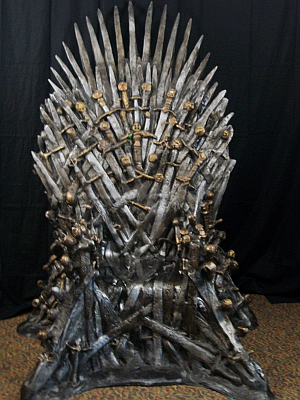 (The Iron Throne from Game of Thrones)

Stay tuned for Part 14 which includes a panel on the revision process.