The final panel I attended was called “Lore of Swords” which was presented by Diana Pharaoh Francis, Ruth Frey, George R. R. Martin, and J.A. Pitts. (AQ is an audience question.) 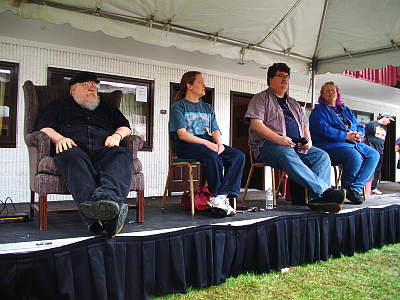 JAP: Why are people so fascinated with swords? Most of history, you just didn’t want to get killed. So why would you use a sword?

DPF: It’s a good weapon. It needs skill. And you can use it on horses. In urban fantasy, a steel sword is 92% iron. Magical creatures don’t like iron so it works better than shooting with lead.

RF: For the historical aspect, why is there this mystique? Lots of weapons were used historically. One classic is the axe. The axe could be deadly, but you could also use it around the house. Not much metal was used to make it. On the other hand, the sword used a lot of metal. Back in that time, knowledge about metal working was not advanced. A sword was only good for one thing, like Alton Brown’s “uni-tasker.” It was for kings, the aristocracy, and warfare. The technology was very advanced so it would seem that the smiths wielded magic to make them. So there was the mystique, the swords were given names and passed down through the generations. In the 13th and 14th centuries, the common people could afford swords now, but there was still the mystique. If you think of films like Crouching Tiger, Hidden Dragon, the mystique crosses cultures.

GRRM: What she said. Swords are cool, man. There are different types of swords–cutlasses, rapiers, broadswords, etc. There are a hundred and one varieties. So you can decide what’s best for what purpose. It’s not like that with other weapons. A spear is a spear. If you found a dead knight, you would take his sword. A sword could do a lot of damage in battle. Is killing thirty-seven men in battle an exaggeration? Maybe not. The knight had armor and sword training while those thirty-seven men just had pointy sticks.

RF: Knights were trained since they were seven years old. While everyone else was just rounded up when it was time to fight.

GRRM: It was good to be a knight, especially in battle. A spear can be potent, but most spearmen were not trained and the spears didn’t have metal points. Swords were a status symbol. It was like a Lamborghini while a spear was a Honda. They had magical sword legends. But no one names their axe. (Who calls their axe ‘Fred’? Maybe I should…) Legends beget legends. Modern science fiction and fantasy also picked up on swords like Excalibur and contribute to the mythology. Like Elric’s Stormbringer. Or the Valyrian Steel sword in my stories.

RF: There’s a nice updating of it in science fiction. An example is the Jedi light saber which is a variant on the sword. The amount of training and variety of techniques you can do contributes to the mystique. If you give an untrained person a sword, he won’t be able to use it. Someone who can use it will seem magical.

JAP: I started my book by picking a sword for a short story. I picked the Norse sword Gram. If you have a powerful sword, it will make your opponent scared.

DPF: I needed to figure out what you couldn’t do with a sword. If it’s a long sword, you don’t put it on your back. If the sword is belted to the waist, it would be difficult to sit and walk with it. It would make it hard to mount a horse. I’m into realistic weaponry. If you have a hand or half sword, then it doesn’t have the sharp edge. In battle, a long sword would be a bad idea since you could cut down your own people. So what are you capable of doing with it? Can you wear it day to day? What’s the maintenance?

GRRM: It will depend on what sword you’re writing about. The type of sword could drastically change your fighting technique and whether you’re wearing armor or other type of clothing. In fencing, the sword against sword is primarily defensive. In medieval times, defense was the shield. I can see film choreography, but it is not realistic. It’s for show not killing. In real life, it’s to kill and they will aim for your leg, not the shield. In film, you seldom see hits on legs. But on Viking battle fields, you will see remains where the wounds were on the legs. It’s not like theatrical shows. Fights are generally short and over in minutes. All it takes is one mistake.

RF: I study the use of weapons as a martial art. But that will bore the audience since technically you want to end the fight quickly. On the battlefield, you might not necessarily want to kill people. You just want to maim in order to neutralize while the others after you will finish them off. Reality is brutal.

JAP: How much on the battlefield relies on luck rather than skill? Is it due to the mystique of the sword?

RF: Probably. Some people buy too much into the mystique. For example, the Agincourt French knights were devastated by the English archers because they thought they were invincible.

GRRM: You’d think by Agincourt, which was eighty years after their defeat at Crecy, they would have learned their lesson. But knights were generally the terror of the battlefield. The mounts were also part of it.

AQ: What length determines a long knife and a short sword?

RF: People argue over it. I would recommend looking at Oakeshott’s Topology of Swords. It’s classified on a spectrum so it’s hard to draw the line.

AQ: Why is there still a mystique for the sword? We have machine guns and atom bombs now.

GRRM: Swords are cool. Replicas are being made of the swords from my books at Valyrian Steel. But there is a mystique about guns. Every night I’ve been in Montana, the dinner conversation inevitably went back to guns. Guns provoke a similar mystique. Is it about killing people? No, because you can kill people with kitchen knives. Are there legends on it? It’s undeniably there. There aren’t many legends on other medieval weapons. And other replicas don’t sell as well. Other weapons don’t have the glamor of the sword. No one names their morning star. Why does magic not attach to some of the other weapons? Well, there’s one example, the warhammer which Thor had named. The warhammer is better in a fight than a sword. Nonetheless…

JAP: But you need strength for the hammer. And swords are superior to guns when fighting against zombies. You don’t need to reload. In D & D, the sword does more damage than the morning star.

AQ: Do you act out fight scenes?

DPF: Yes. Also I can imagine it in my head. There was no penicillin at that time, so you will want to kill your opponent before you get scratched. A cut could kill you.

JAP: I do taekwondo to see how the bodies move while fighting. It’s not what you see in films and comics. You should call the experts.

GRRM: No, I don’t act it out. It’s a good way to smash furniture, destroy your house, cut off your fingers, conk your own head, and spray your brains on the wall. I like to watch the TV show Deadliest Warrior, especially the first two seasons. They tested medieval weapons with computer simulations between Spartans and ninjas. With their tests, they used packs filled with gel simulating blood so you could see the damage. There were weapons that could cut through a pig carcass. Defense always wins. One mistake in writing fight scenes, and I’ve been guilty of this, is pitting guys with heavy armor against a quick guy in light armor and having the guy in light armor win. But in reality, he would lose.

RF: One caveat. If you have five or six lightly armored guys against one guy in heavy armor, they can take on the knight.

AQ: There are sword making differences between the east and west. For Japanese swords, two materials in layers were used to make a strong blade. Did the Europeans ever catch on?

RF: The Japanese compensated for the poor materials they had on hand. The Vikings and Norse would also do something similar. But as the technology got better, the metal became good throughout.

GRRM: It did develop independently in the west. Damascus steel, which was brought to Spain by Moorish influences, was highly prized. In recent decades, samurai swords also assumed the mystique while people began discounting western knights as oafs. But that was also martial arts. A samurai blade was sharp because there was no armor. It’s useless against armor. Only magical swords don’t get blunt. If you pit a knight against a samurai, the knight would win.

RF: There are an insane variety of swords, but they’re not all from the same time and place. They’re finely tuned for when and where they were developed. A fight between a knight and a samurai would never happen because they weren’t in the same place.

AQ: What are the best books on swords?

JAP: There are these books by George R. R. Martin….

GRRM: There is a book by John Howe who is a Tolkien artist and a re-enactor.

RF: I would suggest Ewart Oakeshott’s Classification on Swords and Arms and Armor of the Medieval Knight. There are also medieval texts online by classic medieval masters.

JAP: Don’t use Wikipedia, but you can use their sources.

DPF: I do research on swords and fighting in different cultures. I also see how blacksmiths make swords. This will inform how the character will do things.

AQ: How would people wielding great swords, like giants, fare in battle?

GRRM: Most two-handed swords were not used in battle. They were usually used for ceremony and cutting off heads. In battle they were clumsy. However, in post-medieval times, there were large groups of pikemen. Soldiers using those swords were used to break up the pikemen formation so the horsemen could come in. They were not used to fight. But if you write fantasy, you can do this for a superhuman like Hulk but not a normal human.

RF: They did double duty and it was a hazardous job.

AQ: Can a sword made of better material cut through a sword of poor quality?

JAP: Due to the laws of physics, no.

RF: You can break one on impact, but no, you can’t swipe through another sword.

GRRM: It will notch it, but there’s no swiping through unless that sword is made of butter. So what’s your favorite sword fight scene? Mine is the fight between Inigo Montoya and the man in black in The Princess Bride.

RF: The Duellists by Ridley Scott.

JAP: The final Boromir scene in Lord of the Rings.

AQ: How about Errol Flynn?

GRRM: In the original The Adventures of Robin Hood. It’s a classic. But Errol Flynn actually didn’t know what to do. Basil Rathbone had to figure out how to make the idiot look good.

And then there were the closing ceremonies for MisCon where there was a screening of the MisCon 27 Trailer and the announcement that next year’s guest of honor is Jim Butcher.