On the Road Armed with Vegetable Chips

After a sizable meal at one of our cousin’s regular breakfast haunts, Kensington Cafe (I had the Sandy Eggan, a breakfast bagel with eggs, cheese, avocado and tomato, which was very filling but also pretty good), and picking up some water at a nearby Target, my sister and I headed north on I-15.

The drive on I-15 was fairly uneventful. A brief rain shower did make the drivers around me freak out and significantly slow down. And the bit of interstate going through the mountains between San Bernadino and Hesperia was rather pretty. I should probably also admit here that I did all of the driving on this road trip. Mostly due to practical reasons as my sister’s home is in a large city with an excellent public transport system and she hasn’t driven in five years. I, on the other hand, have experience navigating dirt roads and blizzard conditions. So my sister acted as navigator, looking at maps, fighting with the GPS, and checking out my blind spots when needed.

A little past noon, we arrived at Barstow. But we soon nixed plans to have lunch there. For one, we weren’t all that hungry after the large breakfast. And secondly Barstow, despite being in the middle of nowhere, appeared to be on the brink of being devoured whole by a gigantic retail monster. Outlet malls sprawled everywhere. Perhaps after Christmas sales exacerbated the effect, but the place crawled with crazy-eyed shoppers. So I gassed up the rental and we headed east on I-40, munching some vegetable chips my sister had the foresight to pack for the trip.

Along I-40, we caught glimpses of the old Route 66. I suggested that maybe we could drive on Route 66 instead. My sister pointed out that it was smaller and we’d go slower and we’d never make it to Flagstaff before the sun set. So we continued on I-40. However, we did stop for half an hour in Kingman to look around. 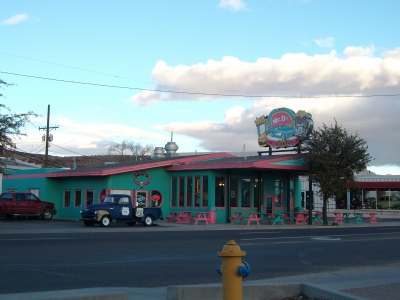 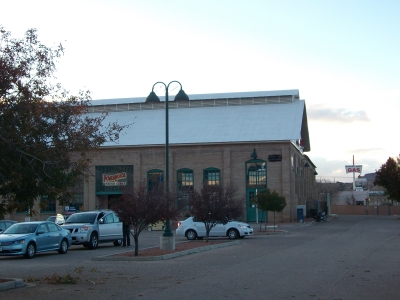 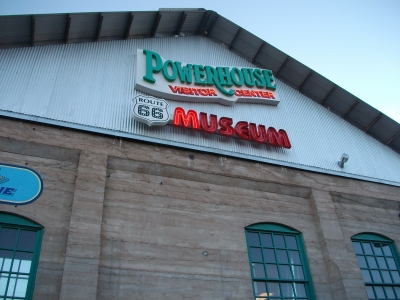 The drive so far had been excellent. But as the elevation climbed and we began noticing white stuff on the ground, it also began to snow. The car dashboard began hysterically beeping. After a quick check of the manual, my sister informed me it was doing that because the car was warning me it was getting below 39°F and there might be slippery road conditions. No duh, silly car. Just outside of Ash Fork, Arizona, the traffic came to a complete halt.

Ambulances and police cars passed us. The radio mentioned nothing about a jam on I-40. Just Californian traffic news. A woman who couldn’t wait jumped out of her car and took a pit stop at the side of the road. “This is probably going to be the worst part of our trip,” I mused aloud. “We’ll be going back to San Diego on the southern route.”

“I’m just glad you’re driving and I’m not,” my sister replied as all the vehicles inched forward ever so slowly on the icy slick road. “At least it’s not snowing now.” She was right. When the traffic stopped, so did the snow.

By the time we edged past the scene of the accident, all we could see was a large semi shoved to the edge of the road shoulder. The ambulances were gone. But the traffic didn’t quicken after the bottleneck either. Despite the 75 mph speed limit, everyone was going 20 mph from there all the way to Flagstaff. By the time we got to our destination, it was 9 PM and way past our estimated arrival.

The only place near the hotel that was open at that late hour was the Delhi Palace. I was pretty tired and brain dead after all the driving, so I let my sister, the knowledgeable foodie, order for me. We had chicken tikka and saag paneer. It was surprisingly good, for a strip mall joint next to a Walmart, but it possibly could have been my hunger talking, too.

That night, we watched the Weather Channel hoping things would be clear the next day.