Sometimes, an idea hits you and just won’t let go.

Earlier this week, I was looking through All of Bach, an unfortunately horribly designed website for a musical group in the Netherlands attempting to perform all of J.S. Bach’s works, when I wondered what would happen if all that music wasn’t just music but also magical spells. And that was when the concept for the novel I’m doing for July’s Camp NaNoWriMo was born.

The first thing I figured out was who the characters were. But I couldn’t really do them in isolation without the plot. I ended up with three time lines:

1. The Historical Time Line (1750-1871): This starts at J.S. Bach’s death and ends just after the death of Heinrich Engelhard Steinweg, the founder of Steinway & Sons. I’m taking massive liberties with these historical figures, but I’m imagining them in a parallel fantastical universe where music is magic. This time line details how Bach’s Folio, containing the fictional Devil’s Oratorio gets from Germany to New York.

2. Mid-Century New York Time Line: As the most focused of the time lines, this takes place entirely during 1952. It’s about a classical pianist, loosely inspired by Glenn Gould, who discovers the Folio in his new home (a former Steinway & Sons piano factory). He becomes obsessed with the Folio and slowly descends into madness.

3. The Present Time Line: Set in modern New York City, the protagonists are Juilliard students working on a project for their music history class. The main character is a jazz student who does moving work and rap contests for extra money. He hears rumors that the Folio was stolen from Christie’s before it could be auctioned. Meanwhile, he tries to figure out why one of his friends, a Jim Morrison fan, is suddenly interested in country music.

With three time lines, it became natural to structure the outline around one of Bach’s three-part inventions.

So, with the outline done, I’m off to read up on history, New York, and music in general. And after that, I’ll probably let the idea percolate in my head until July rolls around.

While working on the outline for Camp NaNo, I decided to do something different for some of the prep. Below is a scan of just part of the outline in “circuit diagram” format.  It’s kind of nifty since it allows me to see where all my characters are temporally as well as their physical locations. 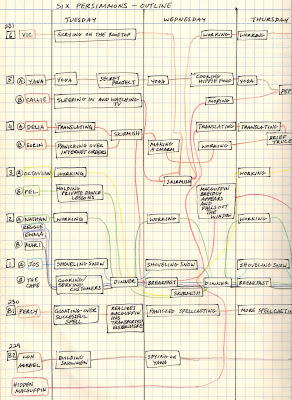 I like trying out different types of outlining techniques, particularly visual ones, to see what works and what doesn’t. And I’ve found that I tend to avoid the verbose techniques (like the snowflake or phase methods) because nothing kills creativity and spontaneity like writing out every single detail ahead of time.

And the Planning Begins

The planning for this year’s Nanowrimo project started several months before, but usually it’s in October when the planning really gets kicked into high gear.  For the next two weeks, I’ll be figuring out the path (flight trajectory?) that my characters are going to be taking in the story.  There’s also going to be an underlying mystery which can’t precisely be written by the seat of my pants.  I have an overarching idea for it, but no details.  I haven’t figured out who the villain will be either.

There’s also something different I’m doing this year.  I am actually soliciting dares on the Nanowrimo forums to literally fill up my story menu.  The last time I incorporated a dare into a Nanowrimo novel was back in 2002 when another participant suggested that I write in someone going over the Niagara Falls in a barrel.  This is sort of like doing a Piers Anthony, except I don’t particularly want puns–just some really wacky made-up alien foods.  If you’re not a Nanowrimo participant but still want to suggest something, just comment on this post.  I’ll be posting the novel online as I go (like I do every year) and doing a running tally of acknowledgements.

Here’s a glimpse of some prep work (also located here):

That magic 50k word count will most likely come early this week as I’m currently about 3.5k away from the goal.  However, I doubt the story will be actually finished at 50k.  Since the month is not over yet, I will continue writing and hopefully wrap things up at around 60k.  For the curious, here are the proposed upcoming chapters.  Some things may change, get switched around, or consolidated while I write them, but the basic plot remains the same.

Chapter 27 – Loki shows up and Freyja’s plans are spoiled.
Chapter 28 – The Wyrm discovers a clue about Thor’s whereabouts but it’s a trap.
Chapter 29 – The main characters visit the opera.
Chapter 30 – The gypsy pops up again to cause trouble.
Chapter 31 – A train ride to Cark.
Chapter 32 – Arrival at Tyr’s country house and a game of archery.
Chapter 33 – Dinner and the Wyrm’s disappearance.
Chapter 34 – Flight to Scafell.
Chapter 35 – Thor’s devious plans revealed.
Chapter 36 – Endgame.

In the meantime, I’ve been thinking up ideas for Augnowrimo.  So far, I have a sci-fi plot that will be done in first person that’s sort of inspired by an essay called The Lizard, the Catacombs, and the Clock.   I’m thinking about keeping the Augnowrimo project relatively low key.  Minimal planning.  No spamming of my twitter feed with writing sprints.  I will most likely not post it on my website as I have been doing with my other projects.  However, I may post excerpts on this blog if any of it turns out to be interesting.